Death of a whistleblower

Ian Fishback exposed the torture of detainees in Iraq. Then he got a PhD in philosophy. Now he is dead at age 42.

But don't call it a conspiracy, writes Ivan Oransky.

The song that is running through my head this morning.
Posted by Carl at 4:23 AM No comments:

Does this sound fishy to you?

Freedom of Information Act requests are rarely speedy, but when a group of scientists asked the federal government to share the data it relied upon in licensing Pfizer’s COVID-19 vaccine, the response went beyond typical bureaucratic foot-dragging.

That’s how long the Food & Drug Administration in court papers this week proposes it should be given to review and release the trove of vaccine-related documents responsive to the request. If a federal judge in Texas agrees, plaintiffs Public Health and Medical Professionals for Transparency can expect to see the full record in 2076.

I've been looking for this episode of 60 Minutes online for years. If you don't remember the epic research scandal at the Hospital for Sick Children in Toronto that began in the 1990s, here's your chance to inform yourself. A highlight: Barry Sherman, the CEO of Apotex, getting caught on camera in a lie and then, believing the cameras weren't rolling, calling Olivieri "nuts."
Posted by Carl at 4:42 AM No comments: 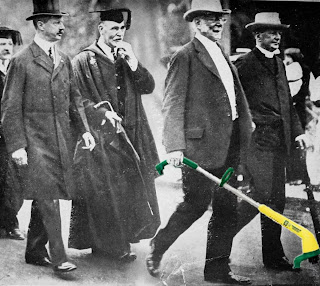 We’re on the road, my son Crawford and I. It’s time to visit colleges, and our schedule is brutal. Hot car, blinding sun, 12 colleges in 10 days, Ann Arbor to Sewanee. Onward we drive, Zevon on the stereo, afternoon into night, our mission fueled by gas-station coffee and Doritos. When we stop, it is for college admissions tours, barbecue, and, on one occasion, a broken alternator belt. I don’t even like to think about how far we have traveled.

The trip has revealed aspects of university life previously unfamiliar to me. Based on our extensive research, I am prepared to summarize the primary objective of the American university in two words: Lawn Care. Never have I seen such careful attention to landscaping. The clipped shimmer of the grass at these American universities would put Augusta National to shame. Equally impressive are the campus golf carts, each one piloted by a middle-aged groundskeeper wearing a baseball cap. Our prize for Most Outstanding Golf Cart: Swarthmore College, where we spotted a Shriner-sized vehicle that resembled a miniature, air-conditioned RV.

Another revelation: The procedure American colleges have designed to court prospective students is identical, no matter how different the colleges themselves. (Is there an instructional manual somewhere?) First there is an “informational session,” conducted by an admissions officer. This is followed by an hour-long campus tour, which is led by a student with a talent for walking backwards. During these sessions all the prospective students will be asked to tell the group their names, where they live, and what subject they plan to major in. (“Hitler Studies,” Crawford keeps threatening to say, but he wisely decides to keep that to himself. Sincerity, we have learned, is the watchword of the college admissions officer.)

On the campus tour, we are always shown a dorm room and a dining hall. We are always taken to a library and told how many volumes it contains. We are informed how many students study abroad (a lot), how many student clubs there are (ditto), and how small the classes are (very small.) We are told about the exciting new environmental-studies major and the many opportunities for undergraduate research. A striking number of student tour guides seem to have been instructed to inform all visitors about the marvels of the interlibrary loan system. Another running theme is the location of the post office. According to our tour guides, professors at every university, no matter how large the campus, are spectacularly friendly and often invite students to their houses for dinner. Some professors routinely offer to wash students’ cars and do their laundry.

I will admit that these tours offer access to two things that we cannot get on the Internet: conversation with an actual student, and a feel for the physical layout of the campus. The same can’t be said for the informational sessions, which are almost uniformly deadly. (I say “almost” because of one exception: an admissions officer at University of North Carolina, who, despite the fact that he appeared to be about 19 years old, managed to be so funny, smart and self-deprecating that he should probably consider conducting summer instructional sessions for his colleagues at other institutions. Sort of like Roy Williams’s basketball camp, only for college admissions officers.) My tolerance for these informational sessions is markedly lower than Crawford’s -- not because he finds them useful, but because he is more accustomed to listening for hours to adults in authority using a lot of words to say nothing. “This is my life,” he tells me. “This is high school.”

There is one thing missing from these sessions. Twelve colleges and we have not met a single faculty member. Is this intentional, I wonder? Do the admissions officers steer prospective students away from the professors, fearful that we will undermine the sales pitch and drive students away? At Haverford I spot an elderly man who looks suspiciously familiar: bushy beard, wire-rim glasses, tweed jacket. He even has a cane. Too perfect, I decide. He’s probably just an actor.

Reprinted from the Chronicle of Higher Education (Brainstorm), June 27, 2012

The Star Tribune has the story. Public Citizen thinks the FDA was far too easy on Hennepin Healthcare, which was issued warning letters for its non-consenting ketamine trials on unsuspecting patients. It's not hard to see why once you read the documents.

One stunner: the FDA actually told these investigators in a teleconference that there were ethical problems with the trials before they did them. So the investigators withdrew their IND application with the FDA and then did a similar version of trials anyway -- without an IND.

A second stunner: the Hennepin Healthcare IRB approved the trials with an "expedited review," a procedure reserved only for routine, noncontroversial, low-risk studies. For expedited review, the entire IRB doesn't usually even need to meet; they're generally approved only by the chair or a small subset of the IRB. To imagine there is a world in which forced ketamine trials on non-consenting subjects would qualify for expedited review is either incompetence, wishful thinking or delusion.

Here's the first few paragraphs of the Strib story:

A consumer watchdog group is calling on the Food and Drug Administration to take harsh enforcement action against Hennepin Healthcare doctors and a review board that approves studies for the hospital, saying they failed to protect people enrolled in controversial sedative research.

Public Citizen, a nonprofit based in Washington, planned to file a petition with the FDA early Wednesday asking the agency to begin a process known as "disqualification." If the FDA agrees, these proceedings could lead federal regulators to prohibit the doctors and the review board from taking part in future medical research.

The petition follows the FDA publishing warning letters last month citing Hennepin Healthcare's Dr. Jon Cole and Dr. Lauren Klein for ignoring federal safety laws in experimental research on the public. An FDA investigator who visited the hospital in 2019 discovered "objectionable conditions" on studies led by Cole and Klein, according to the letters. Both researchers ignored FDA regulations and used practices that subjected patients to "significantly increased risk," and the hospital defended its research with "factually incorrect" statements, according to the FDA letters.

In a statement, Michael Carome, director of Public Citizen's Health Research Group, said the FDA's letters show a "pattern of repetitive egregious violations" by the doctors and the hospital's Institutional Review Board deserving of the FDA's most serious punishment to deter others from similar noncompliance.